My Mom and Dad just told me that a really nice lady named Stephanie from Andover, Minnesota, sent us a letter about her Tripawd, Gretchen. Stephanie wanted to let us know about a beautiful website she made, that tells about Gretchen’s victorious comeback after a bone cancer diagnosis, way back in 1999. 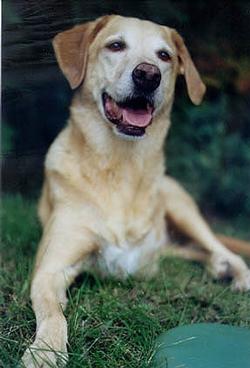 This is the website that was created for our dog Gretchen, who passed away in 2001. She survived osteosarcoma for over two years, which at the time,was really impressive. Vets at the U of Minnesota grew to love her, and she was on the cutting edge of new chemotherapy drugs when she was still alive.

Gretchen went on to hunt again, catch squirrels, and play her favorite game of frisbee. Never in those two years did we regret her amputation and chemo, although there were some unforeseen challenges.

What a beautiful girl Gretchen was. Her story is an inspawration to all of us tripawds, and we salute her family, the Yants, for being early supporters of bone cancer treatments and showing the world that life can be great on three legs. Thank you!