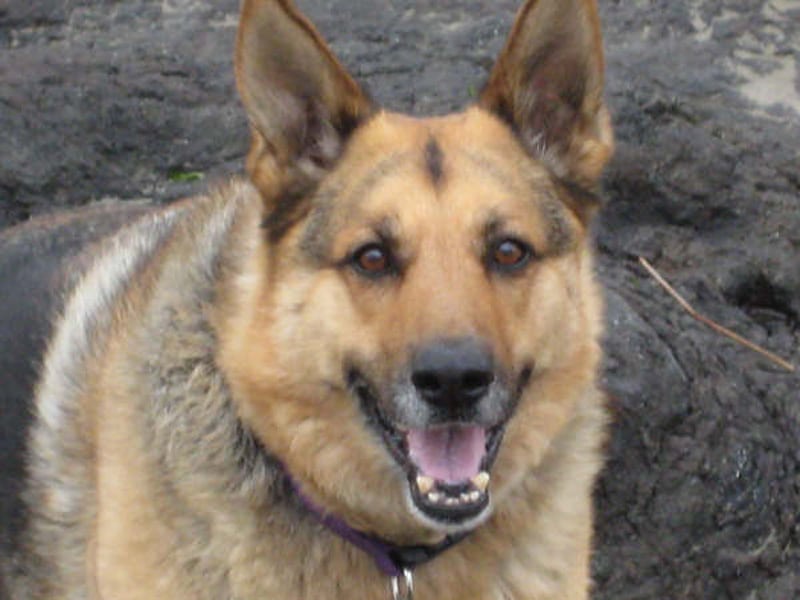 When my parents first saw Rocco’s photo, they did a double take. Who is that handsome boy? Could he be related to our Jerry?

We share a lot of the same loves. Swimming, chewing up sticks, and living life with gusto on three legs. Here’s Rocco’s inspawrational story . . .

Rocco was born in July, 1999. His Mom Cathy says, “We live in Leavenworth, Washington, where we get lots of snow, he enjoys that as well.  He likes carrying huge chunks of snow around, and burying things in the snow.”

Rocco enjoys swimming, running, jumping, playing “chuck-it,” and he likes to tease. He especially enjoys it when Mom and Dad are together in the same room just kicking back.

“He still has the mind of a teenager and is full of life,” says Cathy. 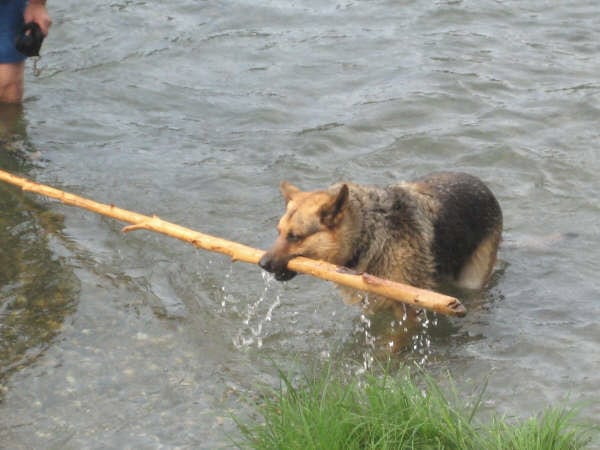 “Rocco is actually too intelligent,” his Mom says. “Sometimes we feel inferior to his thinking.  He tries so much to communicate his wants and feelings and we really have to stop, listen, think and review the situation.”

He was diagnosed in April of this year with bone cancer.

Cathy says “At first, we thought he had just wrenched his shoulder. Upon taking him to our local vet, we received the punch in the stomach news that he has hemangiosarcoma. We immediately went to Washington State University, and commuted the 8-hour round trip for each treatment. They have been wonderful.”

Right from the start he had to have a splenectomy, had a biopsy for his shoulder, then began radiation, chemo, then his leg with the tumor broke, simply due to the bone being weakened. Following the break he had an amputation in early summer, and has been doing great.

“Since his diagnosis, we have not let him sleep alone one single night,” Cathy said. “He is our child and we give him all of the love he can possibly ask for.  Rocco has been a real trooper through this entire ordeal.  I find it to be hardest on Mom and Dad.”

She added: “Rocco is getting to the point where once he is up, things are OK. His stamina is a 16th of what it used to be, but he still does goofy stuff and makes us laugh, loves to show his competitive side (looking for praise and applause upon catching the ball).  Once he is laying down, we can tell it is quite an effort to think about getting up, i.e. for a drink, potty,etc. We try to accommodate his requests by bringing the water to him (which he appreciates). He does not like to get up to go potty if he doesn’t have to, but once we assist and get him up and going, he is content once he is back in his bed.” 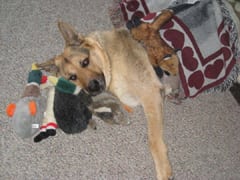 Rocco has had a spot in his lung since his condition was discovered, way back in April.

“I am almost at the point of just relying on how he feels, and not finding out if it has grown.

He has had some breathing issues, which may be related to lung metastasis. But Cathy says “He (still) had the sparkle and still enjoyed himself, so we went with the Prednisone and he improved greatly,” Cathy said.

Upon the recommendation of a local holistic veterinarian, Rocco’s pawrents are also contemplating the use of Arteminisin for him. If you, dear reader, have any experiences you’d like to share about this herbal cancer supplement, please do so in the comments below or in the Forums.

This month, Rocco and his family are heading to the Oregon coast for a little R&R. They can’t wait to watch him play in the ocean once again, and romp around living life to the fullest, as always, in true Tripawd spirit.

14 thoughts on “The Rocco Files: An Inspawrational Life on Three Legs”