When author Marilyn Walton read our post about Serpico the three legged K-9 cop, she contacted us to let her know about her new book – Badge on My Collar: A Chronicle of Courageous Canines. 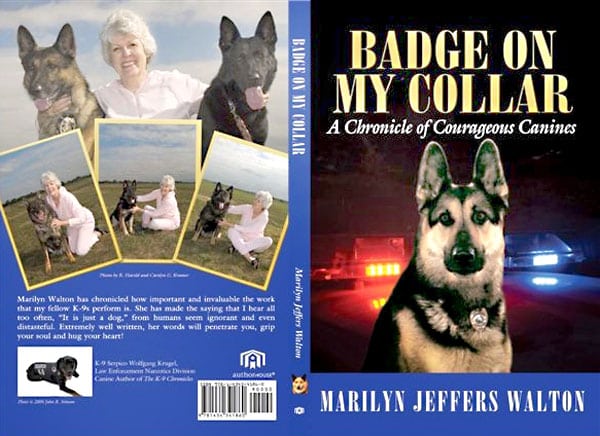 Serpico endorses Marilyn’s book and is featured on the back cover, so we just had to share it with you here …

Her eighth book, Badge on My Collar profiles fifteen police and search/rescue dogs telling their unique and fascinating true stories. One of these brave pups, Luke II, is the highly successful Cincinnati Police Department K-9 who was rescued from the Animal Friends Humane Society in Butler County the day he was to be put down.

Other dogs from around the country and in Iraq are featured in the book. It also includes the poignant story of the only dog lost at the World Trade Center on 9/11. Over a span of twenty years these stories were searched for and collected to create a true chronicle of these self-sacrificing and brave dogs.

How does one fully explain the symbiotic relationship between dog handlers and their dogs?  Officers and their dogs mesh into a solid unit that thinks and anticipates as one as they communicate many times in unspoken words.  By necessity, theirs is an extremely tight bond.  This book is a window into those relationships and the lives of K-9s.  It showcases fifteen memorable police and search and rescue dogs and presents their unforgettable stories.  A twenty-year search for the most heart-warming stories provides a chronicle that gives insight into an often personal world the public seldom sees.

Meet K-9 Argus who against all odds searched for an abandoned newborn in the rugged Canadian wilderness.  K-9 Alley of Maryland whose own pain never stopped her from searching for Pentagon victims of 9/11 and K-9 Sirius of the New York Port Authority, the only dog lost at the World Trade Center, will both be remembered for their heroism.  K-9 Major from Minnesota and K-9 Luke II from Ohio, two of the most unlikely dogs to reach the pinnacle of success, exemplify the dedication and superb training necessary to assure a place on the often-mean streets to protect the public.

The loss of a valued police dog, K-9 Ingo from Tennessee, and the hazards military working dogs such as K-9 Rex face every day in foreign lands, bring a whole new respect for the dogs and their handlers. And as one Ohio dog, K-9 Midge, has demonstrated, sometimes the most successful dog paws do not fit the “big dog” mold. The story of these dogs and many others is told with poignancy and sometime humor clearing up any misconceptions anyone might have about the nature and duties of today’s K-9s. A must read for anyone who has ever loved a dog.

Marilyn Jeffers Walton is a graduate of The Ohio State University.  She has written six books for children, including the successful Celebration Series for Raintree-Steck-Vaughn. Her book, Chameleon’s Rainbow, won a Children’s Choice award in 1986. She is the author of Rhapsody in Junk: A Daughter’s Return to Germany to Finish Her Father’s Story.  She and her husband, a retired Miami University professor, raised three sons in Oxford, Ohio, where they currently reside.  She has always loved dogs including her own canines, Willie, Smokey and a German shepherd mix and K-9 wannabe, Sandy.

Preview Excerpts from Badge on My Collar …

The brightest star in the sky is the Dog Star, located in the constellation Canis (Dog) Major.  The star is called Sirius, meaning “scorching.”  It is twice the size of the sun and twenty times more luminous.  In Greek mythology it is believed to be the bright sparkling diamond in Canis Major’s collar.  In that constellation, Sirius is said to be crouching and ready to pounce.  It is the star that accompanies Orion on his journey across the heavens.  One dog in New York, the star’s namesake, once shone briefly but just as brightly as he accompanied his officer on a day of tragic destiny.

Just after midnight, the first K-9 unit arrived at the scene.  Cpl. Gerry Guiltenane parked his black Chevy Tahoe dog wagon near the woods.  In the far back seat compartment rode K-9 #404, Argus, of the Royal Canadian Mounted Police … It was typically cold in British Columbia’s Okanagan region that fateful night, and the temperature had dropped to a bone-chilling 41 degrees. Wild predators roamed the thick woods in the Canadian wilderness.  Only a week before, a cougar had been sighted in the vicinity where yapping coyotes were common and lumbering bear were occasionally seen … Dual beams from their heavy-duty flashlights cut though the darkness trying to keep up with the large German shepherd that trotted ahead. It had been nearly ten hours since the two-day old baby, Denver Giroux, had been stolen from the Kelowna General Hospital, and now in the early morning hours all that could be heard was the heavy breathing of the focused men and the crunch of their footsteps deep in the woods as they plodded along adjacent to the rippling creek.

It is hard to say how long he had been on the streets.  He was small for his breed and did not exhibit the graceful slant back of a typical German shepherd.  He ran loose on the streets on worn paws, scared and alone, fending for himself and scrounging food where he could find it.  With no home, the raggedy dog found shelter where he could. During bad weather and in the evening, he hunted for a place to sleep and to wait out the long lonely nights.  He was a housebroken dog, and he had been taught to sit and lie down.  He was playful, intelligent and well-mannered having been someone’s pet, but now he was separated from that owner and had to learn the ways of the often mean streets.

Worst of all, no one wanted him.  He was a young dog, but in the relatively brief time he had lived, his days had already been hard as he roamed aimlessly on Ohio’s streets and highways.  Not even two-years old, he carried a piece of buckshot in his back left side no doubt inflicted by someone trying to scare him off when he was looking for a meal. The dog had become a furry hobo, bereft and with few options … Luke was surely not the most expensive dog that ever became a K-9.  He was not even the most handsome.  But his heart was filled with gratefulness to the man who saved  his life, and if put in a perilous situation, he would have gladly given his own life in  deep gratitude.  He was a “rescued dog,” plain and simple – a $10.75 pound-hound bargain, who would never find his original owner.

Day after day, Jamie struggled to regain her health and some normality in her life. Each day she endured pain, but she had a strong will to live, and it was that will that had brought her a long way.  Her world was one of I.V.s, medications, physical therapy and constant pain.  Some days she was clear thinking, and other days she was not. And through the prolonged recovery and the long bedridden hours her thoughts in her lucid moments returned to the dog she had once loved and had left behind in the precarious war zone of Iraq.  Rest and therapy would make her well, but nothing would fill the void she felt without her beautiful knucklehead, Rex.

Find out more about Badge on My Collar: A Chronicle of Courageous Canines on Amazon.com.

4 thoughts on “Badge on My Collar Chronicles Courageous Canines”