When pawrents learn that their dog has bone cancer, they often second guess their decisions leading up to the diagnosis. They find themselves wondering “Why didn’t we see it? Maybe we should’ve done this…or that…” Many wonder; if we knew he had cancer sooner, would things be better? 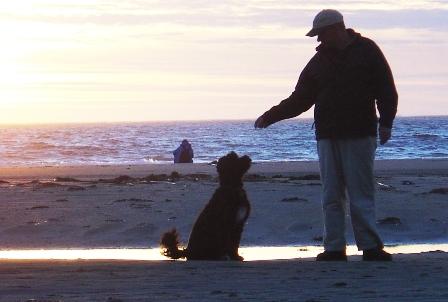 Sarah was one of those pawrents. She and her 5 year old Portuguese water dog, Jake, recently came to us through Tazzie, a mutual friend in Canada. Sarah posted in the forums, looking for advice when Jake’s spinal bone cancer became dramatically worse.

She and Jake had walked a long road up to the bone cancer diagnosis. His behaviors exhibited possible diagnoses ranging from a ruptured disc  to arthritis. When cancer was finally discovered, Jake wasn’t an amputation candidate because the cancer (later inconclusively diagnosed as chondrosarcoma) was in his spine.

Sarah found little information online about bone cancer in the spine, and unfortunately we too made the same discovery. Sadly, in just eight weeks, Jake’s health rapidly declined and the intense pain was too much to bear. After a bone biopsy was taken, he could hardly walk and suffered from bouts of intense pain. Sarah released him from his pain on December 12th, just two days later. 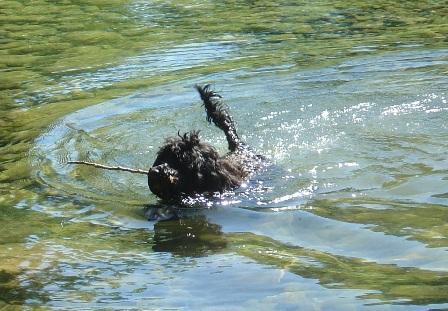 Afterward, Sarah told us that she was completely unprepared for the way in which bone cancer in the spine presents itself in dogs. It was distressing not to find even an ounce of hope or ways to cope.

But Jake’s death will not be in vain. Sarah wrote the following summary of her experience, to help anyone else who might find themselves with a dog suspected of having spinal bone cancer. We are grateful for the time she took to help others in this way.

Please read on to learn about the symptoms, behaviors and progression of this devastating presentation of bone cancer.

Written in the hope that reading it you will be more prepared to cope with this awful disease than I was. The progress of the disease from no symptoms to death took 8 weeks. The cancer was located in the C7 vertebra (lower neck). 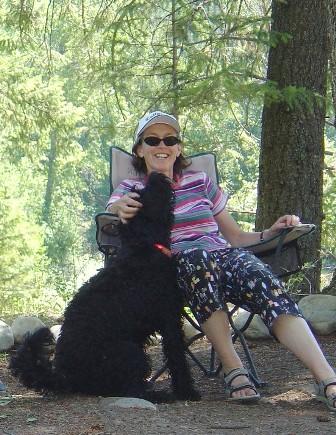 Jake came home on a Thursday afternoon after having the CAT scan and bone biopsy the previous night. He was on Perkocet but a couple of hours after getting home had a bout of severe pain – later I thought this episode must be similar to ‘breakthrough’ pain suffered by human cancer victims.

He had two more of these attacks on Friday night and then early Saturday morning, in spite of having started on stronger pain relief (morphine and Gabapentin – and more Metacam, although he deteriorated so fast I never got around to adding this to the cocktail) and they all followed the same pattern – 5 to 10 minutes of increasingly fast panting, signs of acute pain (groaning and struggling to his feet to stand hunched over, head hanging, tongue lolling) lasting 10 – 15 minutes; 20 – 40 minutes of gradually winding down (I could get him to sit on my lap and would rub him and try to calm him). On Saturday I decided enough was enough, it was too late to try radiation therapy, and I had him put to sleep that afternoon… 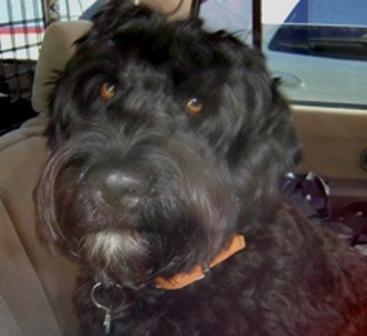 Jake’s own vet and the specialists he referred me to were consistently caring and conscientious. Both contacted me this week after I wrote to them raising some of the issues I mention above. They spent nearly an hour going through things with me, so I think they deserve credit for this, especially my vet, as he must have known the length of time in getting to a diagnosis would be a tricky subject to discuss.

Not a happy end to a bright and loving creature. If you are facing the same I know reading the above will be distressing – but I hope it will help you make the right choices for your pet.

34 thoughts on “Primary Chondrosarcoma of the Spine, Jake’s Story”