All of us have an ache in our heart whenever we see an email or Facebook post that begins with “Beautiful Dog on Death Row Desperately Needs Home.” 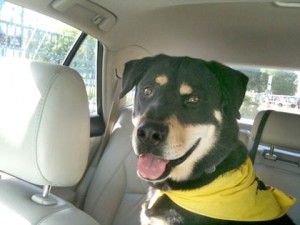 We all want to try to help, so we spread the word to everyone we know via places like the Tripawds Rescue Forum or Facebook page.

Oftentimes, like in the case of Tripawd Miles, a success story happens and the dog finds a furever home. Sadly, oftentimes we’re not quite sure whatever happens to other rescue dogs.

We all want to do what we can to help dogs find homes, but Tripawds just discovered that sometimes our good intentions can lead to confusion that hinders the process.

We recently learned from a friend who heads up a rescue organization, that many of these “last minute” dog-on-death-row alerts aren’t always what they seem.

An Urban Legend is Born

Many times the dog isn’t actually on death row, but in our enthusiasm to help, we give people that impression. Rescue stories often end up being passed around like the telephone game, with the facts becoming so mixed up that it’s hard to get the facts so the dog can be helped.

For example, recently we were told about a German Shepherd who was looking for a home, and his picture was posted in the Tripawds Rescue Forum and Facebook page. His amputation had been done and paid for by the rescue group, but suddenly his time was up and he needed to find a home, “or else.”

A call out went all over the web, and people were desperately trying to help spread the word, including us.

After reading about him, a Tripawds friend who leads a German Shepherd Rescue Group did some investigating to try to help.

He learned that the name of the shelter the dog was supposedly in was wrong (the dog was actually in Florida, not California), and the dog was in no danger of being euthanized.

Since the call went out, the shelter had been besieged by phone calls from people trying to help. Exasperated, the shelter director told our friend:

“Why on earth would we have him on death row after paying thousands for his amputation and care?!”

After learning this, we wondered how we had missed that little fact in the earliest posts on Facebook. The dog was up for adoption and the shelter was doing all they could to find him a home.  All the calls and emails they had been answering from well-intentioned folks were actually preventing them from getting their work done.

Assess the Situation Before Spreading the Word

Stories like this can circulate through the Internet for years. Many shelters still get calls about “Lab Puppies Found by the Highway Need a Home Now!”  years after they were all saved. We think there really needs to be a “Snopes.com” for rescue dog stories!

We learned a valuable lesson, that sometimes we can do more good, by getting out of the way of the shelters who are trying to re-home the dog. Of course it’s good to try to help, and although we don’t claim to have the answers as to how to discern fact from fiction, maybe we can all ask ourselves these questions before telling everyone we know about the dog:

Can you think of any other ways we can do more good when trying to help?