How wonderful that our recent Tripawd Tuesday Call for Entries resulted in more stories! Don’t forget to send your story to Jerry today. But now, it’s time to grab a cup of tea and check out Teddy’s story. He’s a large, lightening-fast Tripawd pup who can’t be stopped from having a ball. Here’s what his mom Amber told us:

Tripawd Teddy: Back to Being a Puppy 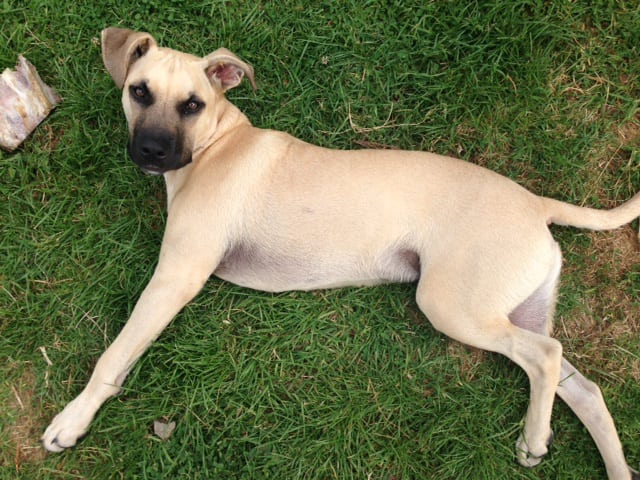 My partner and I adopted a Mastiff/Ridgeback X puppy named Teddy (now nearly 7 months) at the end of August. About 3 weeks ago, he was running and tripped, snapping his elbow joint in half. Our best option to assure his quality of life, without early on-set arthritis, was to have the leg and shoulder amputated on his right side. We were devastated. Although apparently it is a common fracture for larger pups.

We waited two awful days for the operation and when we went to pick him up post-surgery, he jumped out of his cage, he was so excited to see us! He even tried to chase a bird he saw out of the car window. Morphine eh? The first week however was tough as he experienced phantom pains and had lots of stomach issues. We ended up put him on a neurological drug, which really helped and luckily his mobility has always been fine, which is incredible!

It wasn’t all sad, in the first week he was able to jump into the car and onto the bed without us helping, and in less than two weeks he was back to his old self. A few days ago he dug his first hole and he is back to chewing bones and playing with other dogs, being his little puppy self. He is getting stronger and doesn’t understand why he can’t play all day when we force him to have naps. He is absolutely remarkable, as he doesn’t seem to notice he has one less leg. He can run full sprint in the grass and romp around in long grass no problem, he gets tired quickly, but it doesn’t seem to bother him.

As hard as it has been for me, he is amazing and each day he seems to do something more. In another month I don’t think we’ll notice a difference. He is the best dog ever and we are so happy we have him.

Each Tuesday, Tripawd dogs and cats from around the world can enter for a chance to be “Tripawd of the Week.” Just share your Tripawd’s story and you’re entered to win! On every Tuesday of the week, tell us about your three-legged hero. Just follow these easy steps:

All entries must be received by Saturday at 11:59 pm. One Tripawd story will be selected in the order received to be featured the following Tuesday.