Blind animals and Tripawds prove that limits are just something we impose on ourselves (and on others). Low impact nose work games are one way that physically challenged Tripawds like Novak demonstrate this remarkable tenacity. Today we’d like to introduce a “special needs” nose work champ, Mr. B. He’s not a Tripawd but he’s a blind nose work dog who doesn’t know the meaning of “handicapped.” He’ll inspire you to get your Tripawd into nose work too!

Earlier this year we had the joy of watching Mr. B at work. He’s a blind nose work dog from Southern California who blew us away with his ability to compete with sighted dogs in a canine nose work trial. Curious about how he became such a well-decorated canine nose work champ, we asked his mom, Laurie McDonald about how she helped Mr. B turn into amazing dog he is today. Here’s what she said:

How old is Mr. B? When did he find his way to you?

Mr. B is 4 years old. I met him through a friend who is the director of The Rescue Train – a dog and cat rescue in LA. The director learned of Mr. B through another rescue, Brave Dog Rescue who was fostering him. She knew I had experience with Australian Cattle Dogs. I started going to the foster home and walking him as a volunteer, fell in love and he joined our family.

Why is he vision impaired?

Mr. B has retinal atrophy. Its a progressive condition. He was evidently born with it. His first owner found him as a puppy abandoned in a park and he was already blind. He is 100% blind and doesn’t see any light or shadows.

How would you describe his personality? Does his vision loss have any effect on his daily life?

Mr. B’s personality is 100% cattle dog. He is fiercely loyal, a good watch dog, and is aware of everything around him. In the house, he is at our heels with nose pressed to our calves. This is typical cattle dog behavior. He is quick to learn, stubborn and opinionated. All traits we love. In addition, he is unusually affectionate and cuddly compared to other cattle dogs we have had.

He needs work, he loves food, so nosework is an ideal sport for him. Most of the time we are not aware he can’t see. In nosework you search 4 elements – autos, containers, interior and exterior. I’m not sure the elements matter to Mr. B! Sometimes when he hits an odor cone (the cloud of odor that travels) he will alert – often in mid air. He of course doesn’t know the odor needs to be on something.

As far as how his daily life is impacted, he uses a lot of energy probably taking in and processing his environment, so needs extra sleep and naps. We also give him the support he needs in new places by guiding him on leash and reassuring him. That said, he is highly adaptive and really learns quickly.

What made you want to try nosework with him? How did he do in those early days? And how is he doing now?

I had the pleasure of working my border collie Bug (who we lost last year) in nosework. She had some issues that a vet behaviorist thought would benefit from nosework. When Mr. B came into our life I knew this could be his work. Mr. B earned his NW1 title, and at that trial was given the Harry Award for outstanding rescue dog and was pronounced by the judges. This was quite an honor. We just competed in our first NW2 trial on Saturday. Although we didn’t title, he was amazing and did an awesome job. Most important, he loves sniffing and searching. 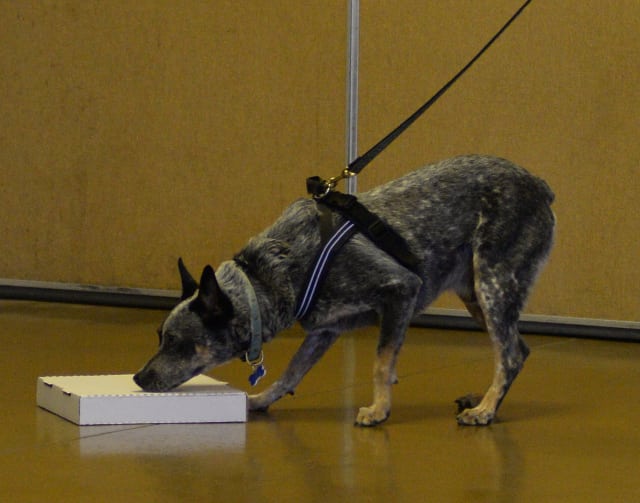 If Mr. B could speak English, what would he say to us humans?

All images by Marcella Winslow, www.pawprintz.pics

To learn more about nose work and scent detection games for Tripawds, see: