Dogs are our co-pilots, our partners, our navigators. When we no longer have them by our sides, the things we did together feel empty and meaningless. Going on seems impossible, but today’s Tripawd Tuesday feature shows that it can be done.

We are honored to present the story of Team W.A.G. — Wrigley, Amy and Gracie, a running trio from Colorado. Amy wrote this beautiful story for a podcast about running. You will LOVE it. Now go grab a hot beverage and a box of tissues. Sit back and savor the unforgettable story of Team WAG’s resilience and spirit. 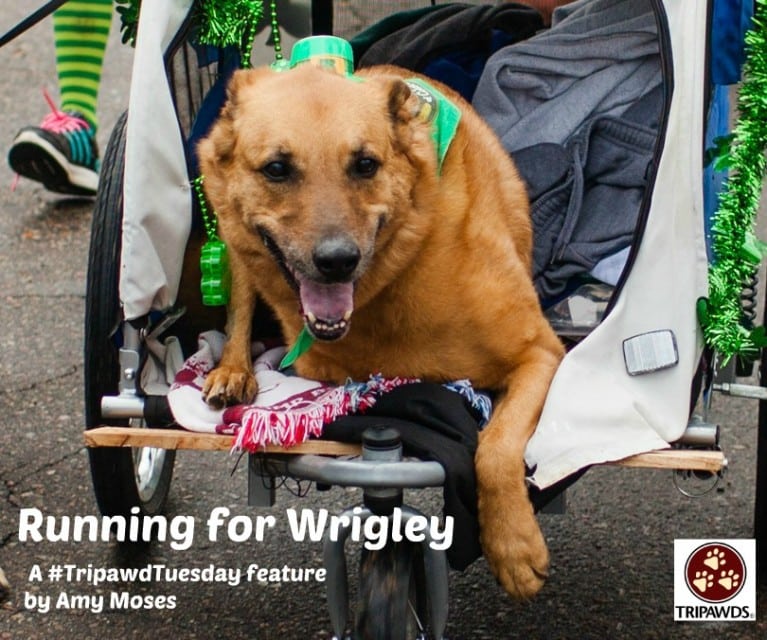 A story by Amy Moses.

You asked your listeners to share who we run for. I run for my late three-legged dog who had a passion for running, Wrigley.

When we was young, Wrigley and I were running partners. He accompanied me on every run and to every race in which he was allowed to participate. When we moved to Colorado nine years ago, our bond became even stronger, as I was away from family and friends and without a job, but the one constant I had every day was my run with Wrigley.

A couple years later, his back legs suddenly became temporarily paralyzed due to an FCE (fibrocartilaginous embolism). The Colorado State Vet Hospital said we’d know within six months if he’d ever regain normal usage of his legs again. After a while, Wrigley was fortunately able to use his legs, but his days of running three to seven miles with me were over. He could, however, still go on short runs and hikes and lots of walks, so we stayed active.

Fast forward a few years, and Wrigley suffered another FCE, again recovering, but still losing more mobility. Again, we stayed as active as his body would allow, going on two-a-day walks with his new four-legged sister, Gracie.

Last summer one of Wrigley’s front legs was showing signs of lameness and the vet initially diagnosed it as a muscle issue, but it only seemed to get worse, so we took him for a second opinion and heard the words that no person ever wants to hear about a family member …. “It’s cancer.” Wrigley was diagnosed with osteosarcoma, or bone cancer, in his right front leg.

Wrigley’s dad and I made the decision to amputate, and within a week, Wrigley was a Tripawd. The vet hospital was a little more hesitant to amputate on him than on most dogs because of his history of rear leg issues. But, we really had no other choice to try to stop the spread of the cancer, as the bone was already too brittle for radiation. The morning after the surgery Wrigley came bounding into the exam room where we waited for him, so excited to be moving around pain-free.

The next two months we had very limited mobility as he healed from the surgery and got used to life on three legs … one good one and two unsteady ones. For those eight weeks I never went on a run. I just couldn’t go without Wrigley, and if I went, Gracie would want to go, and that wasn’t fair to Wrigley, so all three of us bonded together and only did whatever brief walks (or hops) that Wrigs could do. Wrigley began his chemotherapy as part of a clinical trial with CSU. We were fascinated by what we learned about comparative oncology and how vets studying dogs with bone cancer could potentially inform doctors caring for children with bone cancer, as the diseases present similarly.

In the fall a blessing occurred, as we found a trailer online that had been used by another dog and we thought we’d try it with Wrigs. He always had anxiety around certain issues (loud noise, walking over something that didn’t seem stable, etc.), so we weren’t sure if he’d like it, but thought it would be a way for him to get out and about more. After he was healed from the surgical wound, I got him in the trailer and took him for his first walk, pushing him along the trail and he acted like he never wanted to get out. The trailer was dubbed the Wrigshaw and became our saving grace for the next six months.

Every single day we’d go on the trails and run … me pushing Wrigley in the Wrigshaw, and Gracie running alongside us. Wrigley loved the experience just as much as if he was running on all four legs himself. He would smile, sniff the breeze, scope out the squirrels, bark at the foxies, and just have a grand ol’ time riding along while I pushed him. The pure joy he brought to others on the trail was unmatched. Other runners, cyclists, and walkers were more than a little surprised to see an 80-pound dog being pushed in a cart by a woman running, but it never failed to bring a smile to their face. Children pointed him out to their parents, demanding mom or dad to “Look at the doggie in the stroller” and adults young and old broke into huge grins when they saw him. People just couldn’t not be happy seeing him so full of life.

Our mission every single day became to show people to expect the unexpected … and to prove that, regardless of what obstacle life may throw at you, there’s always a way to enjoy what you love.

During those six months, we attended numerous races and Wrigley and Gracie became quite the pair, barking with enthusiasm at the start line, drowning out the sound of any last-minute instructions and then the national anthem. Once the gun went off and we started running, Wrigley would continue barking until we were out of the crowd and he was pleased that we had passed enough people. He had a strong desire to win and didn’t like to be behind others, so would bark and bark to tell his mama to go faster. Other runners would hear him barking and turn around and look to see what was going on … and they’d see the three of us, smile, laugh, and get out of our way! And then we’d pass ’em. I know that one of Wrigley’s greatest joys was racing with three legs in this modified version, just as he had loved racing on his own four legs.

Wrigley finished his chemo treatments and we thought we were in the clear for a while, as his lungs showed no signs of the cancer metastasizing. However, it was lurking in almost every other area of his body, unbeknownst to us for quite a while. His spirit didn’t fail though, and we kept running, racing, and spreading joy, even when his rear legs completely gave out again and he had to completely depend on me for almost everything. The one thing he would still try to do on his own was put that one good front leg into the Wrigshaw while I held his rear legs with his harness, indicating that he still wanted to go running.

Towards the end of April Wrigley stopped eating, and I knew his days were numbered, but I wanted us to do one last race together, My sister flew in from Phoenix, and with my 14-year-old neighbor girl who have mentored in running, we formed Team WAG (Wrigley, Amy, Gracie) and friends, and ran one last race together with Wrigley – The Fast and the Furriest, a race to benefit patients at the CSU Vet Hospital, the very one Wrigley had his surgery and chemo at. My sister, Julie, made the three of us homemade bibs with Wrigley’s photo and the phrase “Running for Wrigley” that we proudly pinned to the back of our shirts. On that day, the 29th of April, we woke up to snow, which was Wrigley’s favorite sign of any season, and walked to the race start with huge flakes falling on us, and then ran the race in the snowstorm, me pushing Wrigley, and him barking excitedly the first lap of the race, using all the strength he had left to communicate his excitement to me.

Just four days later, Wrigley, Gracie, and I went out for our very last run, a four-mile jaunt, with Wrigley’s dad riding bike beside us, just hours before we had to say goodbye to Wrigley, the love-of-my-life dog. For eleven years, he was my partner in life and in running, when he was able. He had suffered so much but always emanated rays of sunshine, and through his experiences I learned to revel in each and every run.

However, the days after Wrigley was gone, I just couldn’t bear to face the trails where we had once sparked so much joy together. For three long, restless, extremely emotional days, my running shoes stayed in the closet. After agonizing, I realized that Wrigs would want me to run and get that spring back in my step and remember him while I did it.

I calculated our year-to-date total miles and realized that Wrigley, Gracie, and I had run 312 miles together from January 1 – May 3. Every single mile I had ran in 2017 had been with both of them. So I vowed then and there that Gracie and I had to run just as many miles for the next four months as we had ran with Wrigs in the previous four … and then repeat that again in the final four months of the year.

Now, every day, Gracie and I rise and run for Wrigley, smile at people on the trail, and enjoy the outdoors, just as he did. We have run well over 100 consecutive days because I can’t face a day thinking that I wasted my ability to run, when Wrigley desperately wanted that ability back during the days he couldn’t.

Who do we run for? Wrigley Hohokam, our fearless Tripawd who runs alongside us in spirit, whispering to us in the breeze, and filling our hearts with love and determination every day.

Is your pet a Tripawd hero?