Osteosarcoma can weaken the body, but this special Rottweiler proved bone cancer cannot weaken the spirit. Today for Tripawd Tuesday memorial to Major, we salute this handsome Australian hero who earned his angel wings far too soon. 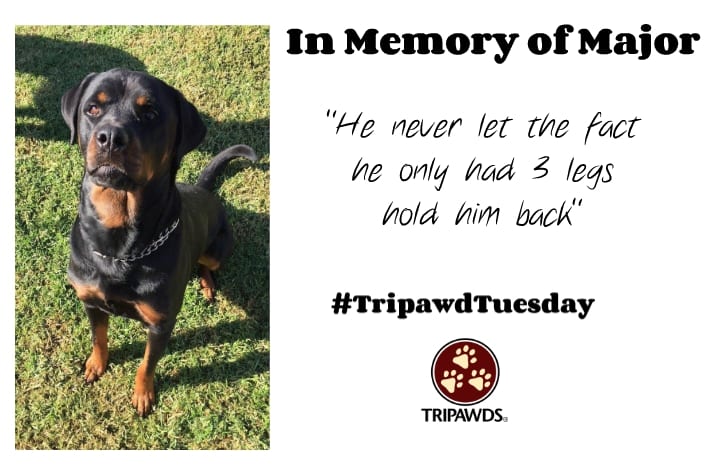 Here is his story, as told by @jamesbennett_96 from Adelaide, South Australia.

A Tripawd Tuesday Memorial to Major

Major was 5 years and 8 months old. He had osteosarcoma in his back left leg. We caught it very early so we thought we were okay. We opted for amputation and so it was carried out 5 months later we got scans not one bit of cancer found in his body he made a full recovery and was loving life.

He was part of the family from birth. The other dog is my other son, Malakai, Major’s brother, obviously not by blood but still grew up together

He never complained or sooked once and also never let the fact he only had 3 legs hold him back in life and kept up with his brother every step of the way.

Two weeks ago from last week I noticed him limping on his front right paw and I was immediately worried the vet said it might be a bone cyst. As once again we caught it early (but) within a week and a half his health dramatically took a turn for the worst. We didn’t think he was going to last the end of the week nor wanted him to be in anymore pain.

So we reminded him what it meant to be a dog one last time and I took him out to where his favourite place was in the world with all his family. We spent that day together. That night I put him to rest.

He was the best dog anyone could ever ask for and he was my son. I am so proud of how much he soldiered on through everything.

Is your pet a Tripawd Hero?